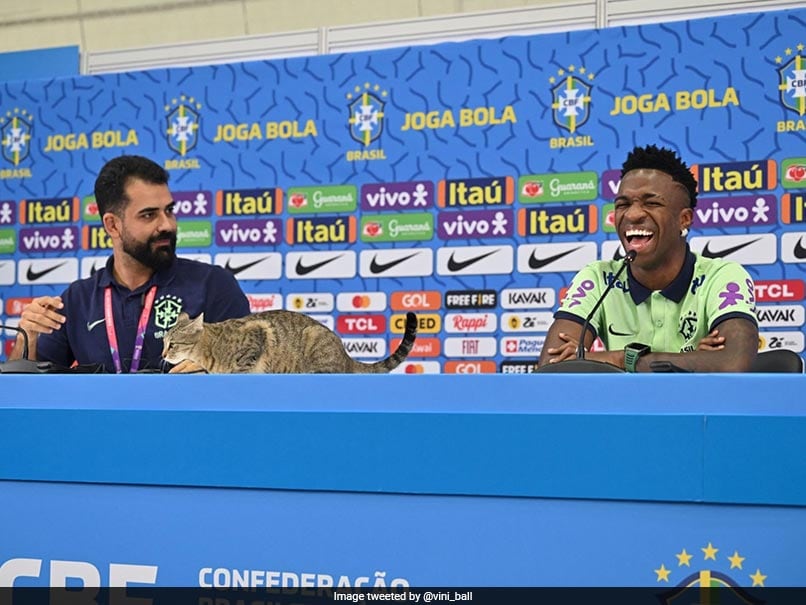 A cat gate-crashed the presser while Vinicius was answering questions from the media.© Twitter

Five-time champions Brazil will take on Croatia in a FIFA World Cup quarter-final clash on Friday. Ahead of the game, Brazil winger Vinicius Jr gave a pre-match conference, which was interrupted by a special guest. A cat gate-crashed the presser while Vinicius was answering questions from the media. The Real Madrid star simply laughed as the cat interrupted the presser, but was not unfazed by the presence. The cat was taken aback as Brazil’s media manager stroked it before grabbing it by the scruff of the neck and tossing it onto the floor.

“I’m very happy to be here representing all Brazilians, being here playing with my idol, Neymar, and with the friends I have here. That union we have can take us very far. Neymar told me that the World Cup is unlike any other competition and I’m seeing that now. I know how important the World Cup is to our country,” Vinicius told the media.

Vinicius has been one of the key figures in Brazil’s World Cup run so far.

The 22-year-old has scored once and set-up two goals so far in the tournament.

Brazil head into the quarter-final clash against Croatia brimming with confidence after a 4-1 thumping of South Korea in its round of 16 clash.

Croatia, on the other hand, edged out Japan 3-1 on penalties in their Round of 16 encounter after the match finished 1-1 at the end of fulltime and extra time.

Topics mentioned in this article